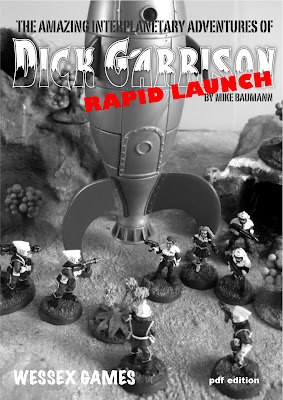 Rapid Launch is a PDF rule set containing the basic rules from our forthcoming Pulp SF miniatures rules The Amazing Interplanetary Adventures of Dick Garrison, the purchase cost of which will be able to be redeemed against the price of the full rules set when released.

Rapid Launch allows you to play the basic game with League of Nations Space Navy troopers pitted against the vile Khanopian soldiers under the command of the despotic Khang the Compassionless and contains three episodes (scenarios) to allow you to get a feel for the game.

A print friendly vanilla version of the rulebook is included with the PDF.
Posted by Steve at 12:07